Home About Us Our Story 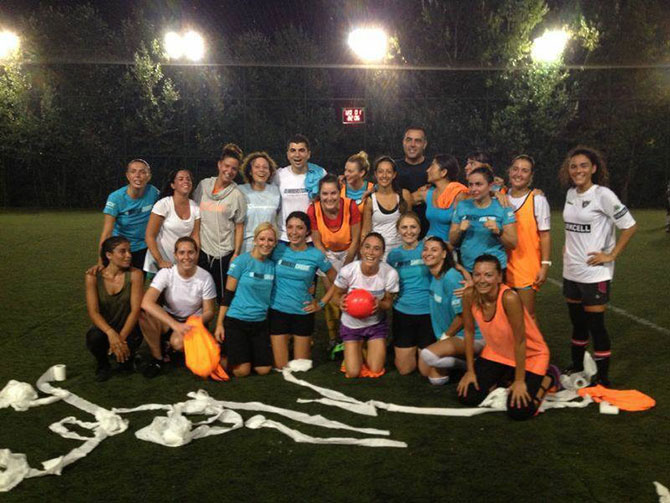 My name is Melis Abacıoğlu. All my life, I’ve been told that being ambitious and desiring something intensely with passion is bad. I remember as an adolescent growing up in a world where shouting “kindly,” being clear by “beating around the bush,” and “ashamedly” wanting something a lot (since being ambitious was bad) were NORMAL.

It was April 2012, a friend of mine named Serra and I were chatting with our male friends over social media. We knew that they were regularly meeting and playing football. We kept telling them, “Come on, let us play too!” but guess what? This cheerful group of intelligent, modern males, who would later become our husbands and families, mocked our call to play football. Serra called their bluff and rose to the occasion. We immediately organised a football match for women, and the following week, 18 women came to play football together at the pitch in Akatlar.

That night was the first time any of us had taken the field!

The lights turned on, the match began and it was the slightly chilly weather of April... The spectators waited nervously. Still 0-0. I was a good runner, therefore, I started as a forward. I came eye to eye with my teammate Didem. I delivered a pass as if I were saving the world, what a moment! Didem received the ball and somehow, a miracle happened: GOAL!!!!!! That brief moment in which the idea of “One for all, all for one” almost comes into bodily existence has stayed in my mind for years. That “moment,” that flood of enthusiasm that I had only seen in cartoons but could not be a part of, was now inside of me.

We lost 6-2 that night, but I won something priceless. I experienced that I could express all those emotions I had been suppressing. A huge wall was torn down in front of me – a wall that I had built with my own hands as a modern women by saying, “Melis is this, Melis is that,” without even noticing. That excitement we felt, with my other teammates jumping on me after Didem, when I allowed myself to embrace the woman I am with her ambition, passion and enthusiasm, that “moment” was a blink of what this life had to offer me.

It was a transformative experience full of incredible discoveries, and that night, I felt in my bones what it means to be empowered by team spirit.

From there, the idea was born of KIZLAR SAHADA, where all women and girls would challenge the gender norms.